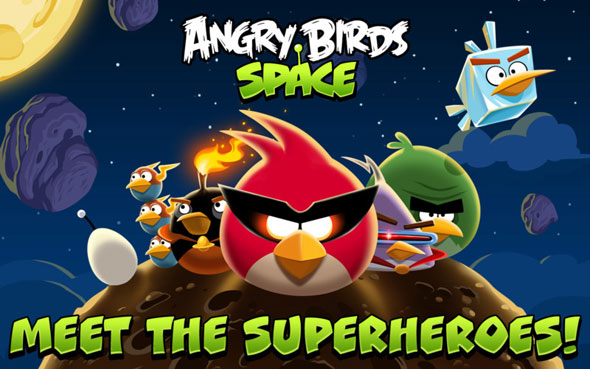 With 60 starting levels, slightly different gameplay due to zero gravity and gravity wells around planets/asteroids, and Rovio’s penchant for continuing to add content to its games, it should have some longevity. I know a lot of gamers look down upon the Angry Birds franchise for various reasons, but Rovio knows their market and they respond to it. It’s a game for when you have a few spare minutes. Don’t compare it to a 50 hour RPG. It’s easy to pick up, and easy to drop. I like Rovio as a company because they’ve refrained from “selling out” to larger companies, who have offered enormous amounts of cash to them, so I am inclined to pick up their games.

Check out my impressions and review below the video.

After a giant claw kidnaps their eggs, the Angry Birds chase it into a wormhole and find themselves floating in a strange new galaxy – surrounded by space pigs!

My Impressions/Review
From the 15 minutes I’ve played so far, it appears to be very polished. Adjusting to the zero gravity/gravity wells is relatively easy, but you really feel the upgrade in physics that have went into the game. I think if they had offered a more conventional addition to the franchise, I probably would not have picked it up. I have finished the other games and have no desire to go back and play them for the most part.

Some are calling this a reboot, and that could be a good way to sum it up, not that the Angry Birds franchise needed a reboot. I don’t think it will be hard to pick up both for those who have played the other Angry Birds games, and for those who haven’t. There is an in-app guide explaining how to use gravity in the game. Once you have gravity down (could not resist the pun, sorry), it’s not that much harder than the previous games. In fact, there are some cool tricks you can use such as knocking or floating debris into the pigs. The birds themselves have undergone some changes that favor the environment. At its core, it’s still Angry Birds. That’s not a bad thing.

There is also a nice tribute to a classic space-based game and some other hidden “Easter Eggs”, but I’m not going to spoil them for you.

Angry Birds Space on a Mac
I like it. Everything is very sharp on both a 27-inch display, and a 13-inch MacBook display. I mean everything – both the background graphics as well as the animated birds and pigs and other mobile items. It’s a great port. Maybe it shouldn’t be considered a port, since it was developed on the Mac to begin with, and the iOS versions should be considered the true ports!

My only problem is that Mountain Lion (OS X 10.8) is not yet here with its built-in Game Center. What you do on the Mac version of Angry Birds Space will not be translated over to the iOS versions, and the same holds true going the other way. What happens when Mountain Lion is released, and developers fully support it and the Game Center functionality remains to be seen. I would just pick one platform for Angry Birds Space for now, and most will probably pick the iPhone or iPad version because as I said before, it’s a great game to have with you when you have a few minutes to kill. Game Center on the Mac will really change things though – knowing that what you do on your Mac will be transferred to your iPhone or iPad should increase the amount of time people play.

Conclusion
I give it a thumbs up. The marketing campaign was fun to watch, it’s very polished on both the Mac and iPhone, and the addition of zero gravity and gravity wells has breathed new life into the series. If you liked Angry Birds, but your interested started to wane with the subsequent follow-ups, I think you ought to give it a chance.

We use cookies to ensure that we give you the best experience on our website. If you continue to use this site we will assume that you are happy with it.OkPrivacy Policy