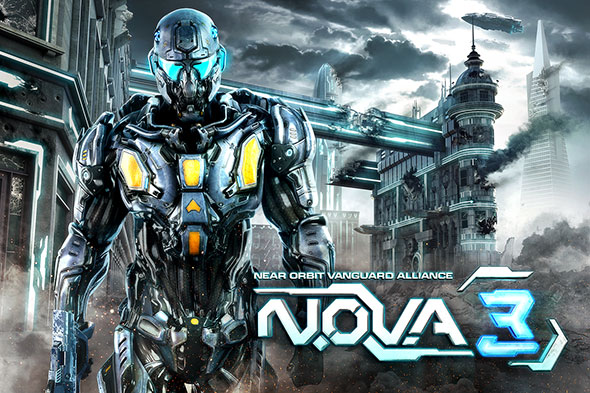 Gameloft has given us a brief look at their upcoming sci-fi First Person Shooter (FPS) N.O.V.A 3 via a YouTube video and an in-character news story. Now while a Mac port was not specifically mentioned, The fact that N.O.V.A. 2 is in the Mac App Store gives me hope.

N.O.V.A. stands for “Near Orbit Vanguard Alliance” and while some describe the multi-player science fiction FPS as “inspired” by the popular Halo series, I see shades of the Tribes franchise in there as well. The N.O.V.A. series is very popular on both the iOS devices and on Macs. N.O.V.A. 2 features up to 10 players in the multi-player version, and several modes – deathmatch, team deathmatch, capture the flag, etc. Scores and stats are tracked through Gameloft LIVE, Gameloft’s online service.

This is an excerpt from the in-character announcement/back story, Civil War Feared In Wake of President Folsom’s Death, for N.O.V.A. 3

Ceremonies are planned this week to mourn President Folsom’s untimely death, including several protests both in support and against the late president. Details surrounding Folsom’s death are still scarce but unnamed sources claim that the president was assassinated by a rogue militant, with some even suggesting that the killer was a member of the N.O.V.A Troops.

This is a screenshot (scaled down) from the trailer, which claims to be in-game footage:

The tagline is “Kal Wardin is back for his third journey“.