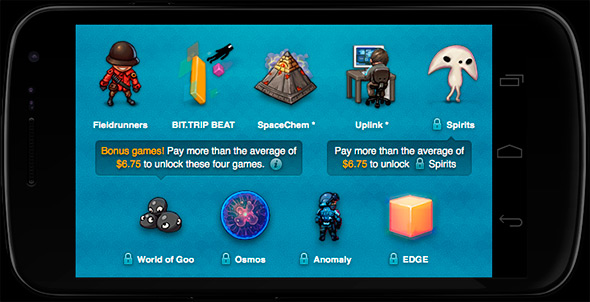 There is less than one more day for the latest Humble Bundle, and it’s labeled the “Humble Bundle for Android, Mac, Linux, and Windows 3” (or something like that). Remember, this bundle is pay what you want, and you get just four games to start with: Fieldrunners, BIT.TRIP BEAT, SpaceChem, and Uplink. While this is subject to change, if you pay more than the average of $6.75, you will get additional games, including Spirits, EDGE, Osmos, and World of Good.

As mentioned, the games include Fieldrunners, a game that was one of the first, if not the first, big tower defense game on the iOS platform, along with several other games, some well known, some not so well known.

Watch the video below for a preview of the games, and below that, check out the system requirements for the Mac versions of these games.