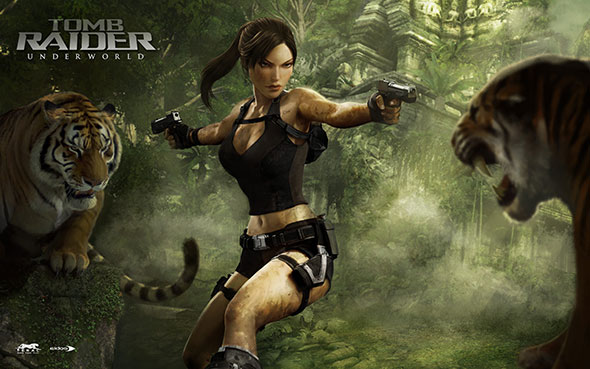 Yesterday, Feral Interactive announced another port of a popular game – Tomb Raider: Underworld will be avaialble for Mac gamers later this month (May 31st) for $25. The hardware requirements are not too bad, and she fights tigers and shards. What else needs to be said?

It may not seem like it, but this is actually only the eighth part of the Tomb Raider franchise from Eidos. While it feels like there have been a lot more, Underworld actually works to unify the series, following the 7th game, Tomb Raider: Legend, as well as filling in gaps left by earlier games.

Grab your guns, grapple and passport because gaming’s most fearless action heroine is about to embark on another daring expedition to the Mac.

Tomb Raider: Underworld takes Lara Croft on her darkest adventure yet. From the crystalline waters of coastal Thailand to the rain-lashed jungles of Mexico and on to a mysterious sunken city deep beneath the Arctic sea, Lara won’t stop until she has opened the gates to the Underworld.

For generations, stories have been told of the fearsome weapon of Thor, the Norse god of thunder. Legend holds that Thor’s hammer had the power to smash mountains into valleys and to destroy even the gods. For more than a thousand years it has existed only as a myth…until now.

In an ancient ruin on the floor of the Mediterranean Sea, Lara Croft uncovers proof of the Norse underworld and the mythical hammer. As she attempts to unravel the secrets behind these myths, Lara’s perilous journey leads her toward a forgotten power that, if unleashed, could lay waste to all civilization.

As noted by Feral Interactive, the requirements can change before the release.