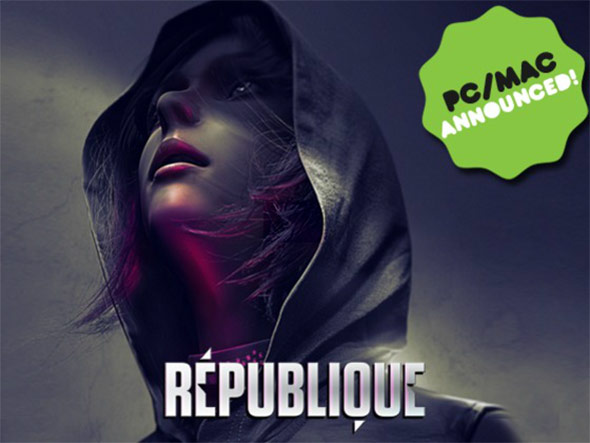 Reqpublique, a horror/action/survival game that was originally intended to be a AAA iOS title, is going to have Mac and PC ports, and all three platforms will have their strengths played to – it won’t be just a iOS port where your finger is swapped for a mouse or a trackpad. Of course, the Kickstarter goals have to be met first.

You receive a desperate phone call from Hope, a young woman trapped within a shadowy totalitarian state. Using a stolen phone, she calls and begs you to hack into the nation’s surveillance system, assume control, and help her escape from the clutches of the omnipresent Overseer.

The decision to go cross-platform and after a Mac and PC version was made after they engaged the community:

….thanks to the community’s feedback, we are committed to delivering a unique version of République specifically designed for PC and Mac with new features, gameplay and story elements that speak to the strengths of the platform.

Macgasm’s Grant brings up the biggest problem: They are essentially developing three games on the same $500,000 Kickstarter goal, and that kind of expansion costs money. This isn’t a case of developing a game, and then saying “hey, if we get X amount more, then we’ll add this many more hours of content.” While they may be able to use some of the core coding and design, they are offering up more than just a simple port between platforms. They are talking about three different versions tailor-made for each platform.

Republique has a strong team backing it, there is no denying that – some of the people working on it have worked on Halo, Metal Gear Solid, and F.E.A.R., among other projects.

There is a strong emphasis on storytelling, and the developers hope to “create an intense action game without a focus on killing“. As a fan of the old RPGs, the Ultimas in particular, I really miss a lot of games coming with physical items, such as the cloth maps of Ultima. There will be an opportunity to purchase a Republique Journal (a pledge of $50 or more), that is described as the “physical half” of the game (while not being required to complete the game):

This high-quality book is a “replica” of the one Hope finds in the game: a musty-worn book passed between secret revolutionaries that features hand-drawn maps, writings from undercover dissenters, newspaper clippings from “The Outside,” sketches of the Overseer’s inner circle, and even a translation guide to the graffiti found in the world that may lead to hidden supply caches and audio tapes.

I do like the concepts mentioned, but they’ve taken an already-ambitious project and just upped the difficulty.

Links:
– Republique at Kickstarter
via Macgasm