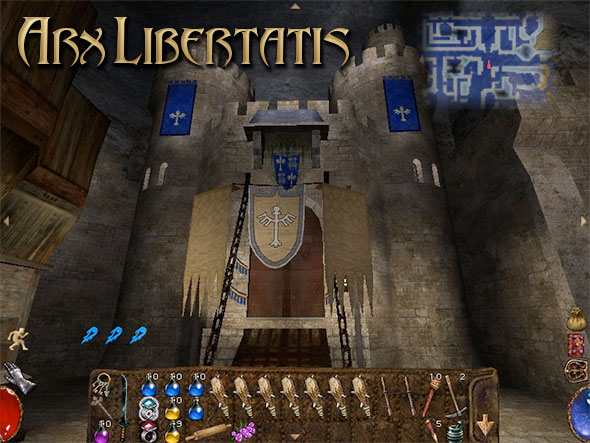 The Arx Libertatis project has released it’s first open-source version of Arx Fatalis, a first-person RPG. A copy of the original Arx Fatalis game is needed. While Mac OS X binaries are not available (at this time), there are comprehensive instructions provided for compiling it, and it has been successfully tested and run under Mac OS X.

This actually kind of flew under the radar for me – it was released over a week ago technically.

Brief History of Arx Fatalis
Arx Fatalis was a first-person fantasy roleplaying game (FP RPG) originally developed for Windows and the Xbox. It was released back in late 2002 by Arkane Studios. According to the Ultima Codex and Ultima Aiera, it was originally going to be a part of the Ultima Underworld series, (Ultima Underworld III) however Electronic Arts would not release the license to them. In early 2011, the source code was released.

After over a year of work we are proud to announce the first release of Arx Libertatis. While some minor graphical glitches remain, the game is fully playable on both Windows and Linux as well as other platforms. There are packages available for Windows and Linux. On other systems you may still be able to run the game by compiling the source code yourself.

My hope is that there will eventually be a regular release of the compiled Mac OS X binaries as many Mac gamers are probably not wanting to build a new version every time an update is released.

It is actually easy to obtain a copy of Arx Fatalis, both from GOG.com ($5.99) and Steam ($4.99). GOG.com is English-only, while Steam offers multiple languages.

While Arx Fatalis can be run under Mac OS X using VMWare Fusion, Parallels Desktop, and Wine and CrossOver, a native port is preferable.