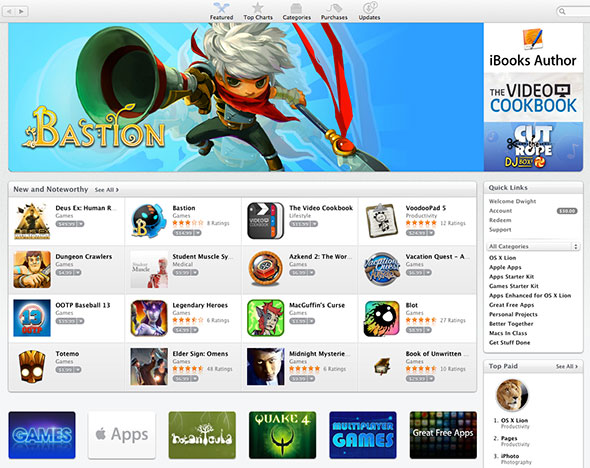 Forbes had an article out last week, How Apple Can Conquer The Gaming Industry Without Firing A Shot, discussing the moves Apple is making and how the hardware, particularly mobile, will make Apple a serious threat to console and PC Gaming.

The writer of the article, Erik Kain, brings up a good point about Apple TV:

Rather than deal with new console hardware, it’s far more likely that Apple will continue to pursue app gaming across its Mac, iPhone, iPad, and television products. We’ll see gaming apps take off in earnest when Apple finally breaks into the television market. Many casual gamers will have no need for a console if their TV sports a large catalog of gaming apps already.

Yes, he used the words “casual gamers” which doesn’t necessarily apply to many people who are following MacGaming.net, but I’ll be the first to admit we cover our fair share of the casual gaming market, and he does have a very valid point.

A lot of developers look at a AAA title that brings in $100 million, and they look at 20 casual games that bring in $100 million combined with a lot less risk, a lot shorter development cycle, and depending on how you look at it, possibly a lot fewer developers. It can take a couple of years to develop a AAA title. Angry Birds was done in months with 8 developers and a budget of under $150,000. It’s sold something like 12 million copies through the Apple iTunes App Store. Obviously not every game can reach Angry Birds’ heights, however a lot of publishers are going to look at the AAA title as risky since a large amount of money is being bet on on title that could take well over 100 developers a few years to finish. On the other hand, if you spend the same amount of money on a dozen or more casual games, yes some are not going to do as well as others, but the risk is spread around.

Something else that Erik brought up – the upgrade cycle of iPhones, which favors Apple – the hardware will continue to advance at a quick pace, whereas the console makers look at longer life cycles and have to try and predict technical and gaming trends a few years out. Sometimes they get lucky, sometimes they are left scrambling for a solution after launch.

There is also the aspect of multi-platform gaming. When Apple rolls out OS X 10.8 Mountain Lion this summer, it will have Game Center and AirPlay Mirroring integrated. People will be able to carry their scores and completed content across devices and onto the Mac – in theory, you can Angry Birds on your iPhone, get home, and play Angry Birds on your Mac, picking up where you left off from on your iPhone. Games like Real Racing 2 will allow you to compete against gamers on iPads, Macs, and possibly iPhones.

It’s actually pretty hard to see where this is all going to go – when the first iPhones came out, nobody predicted that 5 years later there would be well over half a million apps available for it, and that so many game developers would embrace it, not to mention the game companies that sprang up solely to make iOS games. Nobody could have predicted the unique variety of games available as well.

For me, one of the biggest things that Apple has done is lowering the the cost of entry into the videogame market with the iPhone, not to mention the improved ability to reach customers. I had more than a few smartphones before the iPhone, and it was a real pain to get games and apps onto those phones, and keep them updated. It was a pain just to find those games. It’s no wonder that there’s been over 100 million iPhones sold, and that so many apps have been created for them.

Links:
– Forbes – How Apple Can Conquer The Gaming Industry Without Firing A Shot
via: The GameAgent Blog